William Harrold won a dramatic Dawson and Sanderson Travel Classic, beating Bradley Dredge in a play-off at Longhirst Hall to win his second PGA EuroPro Tour title of the season.

Dredge began the final round three behind Harrold (Sheringham Golf Club) but was four ahead of his playing partner by the time they reached the tee of the par-three 16th. However, the Welshman’s lead had evaporated 200 yards later.

While Harrold made birdie two-time European Tour winner Dredge made bogey. But in the process of carding his four had played off a temporary green marked GUR (ground under repair), for which he was penalised two strokes. 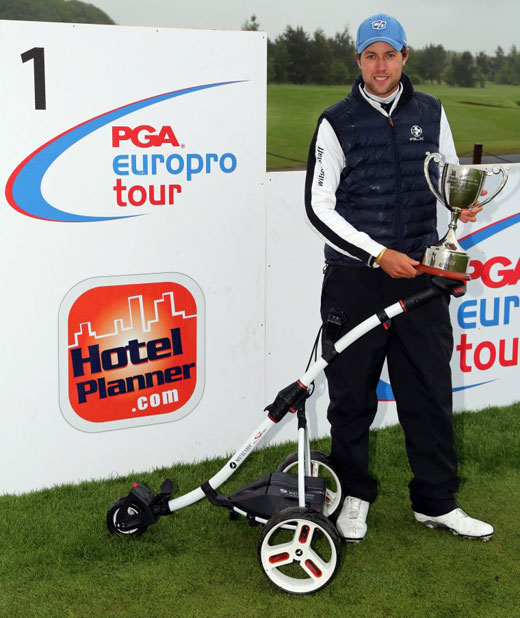 The Welshman learnt of his error on the 17th fairway, but undeterred made birdie to reclaim his lead.

On the par-four 18th he hit his tee shot into the trees, took relief and was on the green in three. Harrold, who was on the green a shot quicker two-putted for par. Dredge had some distance to make up with his first putt and though he came close had to accept a bogey.

In the play-off Harrold made the 18th green in two but Dredge found a fairway bunker from the tee. He played out onto the fairway but his approach bounced off the green. His fourth shot landed close to the pin, but Harrold had two putts to win and needed just one as he birdied the play-off hole to win the £10,000 top prize, a brand new Motocaddy trolley, and a Shotsaver range finder.

“I gritted it out today and did the best I could, suddenly a few things happened and there is a play-off,” said Harrold, whose win sees him move to the top of the Order of Merit and close in on a Challenge Tour card, awarded to the top five earners at the end of the season.

“It is a battle of the mind sometimes. When you aren’t playing great it is so easy to think you aren’t good enough. You have to fight those thoughts and keep taking it a shot at a time.

“The play-off was the same, one shot at a time. I hit a good drive and a similar approach as I had five minutes earlier and got a bit closer and was able to make the putt.

“I have had a good start but you never know what can happen. I can smile a bit more now and think about the top five, which was one of the goals for the season.”

A two-hour highlights package of the event will be aired on Sky Sports HD on June 3, with repeats the following day.