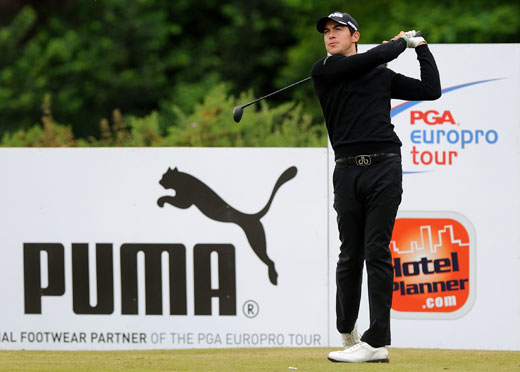 James Robinson won his second PGA EuroPro Tour title after carding a final-round 71 (-1) to finish 12 under par in the Buildbase Open at Frilford Heath Golf Club.

The 25 year old won as an amateur at Slaley Hall in 2010 but this time is able to take home the £10,000 winner’s prize along with a brand new Motocaddy trolley and a Shotsaver range finder.

Robinson (Southport and Ainsdale Golf Club) had broken the course record with a nine-under 63 in his opening round, carded a 70 for the second and then fended off the challenge of Jack Colegate with a 71 for his final round.

Colegate (Deangate Ridge Golf Club) finished just one shot behind on 11 under par having also carded a final-round 71, and James Watts took third on -10 with rounds of 67, 70, 69.

Robinson and Colegate had exchanged the lead several times in the afternoon, but an birdie at 14 and an eagle three on the 15th saw Robinson move two clear for the first time in the final round.

“It is my first win as a pro but I won as an amateur on the EuroPro in 2010,” said Robinson. “It feels amazing to win it as a pro and take the £10,000 home and add that on to the Order of Merit, which is what we all play for at the end of the day.

“It helps for the Order of Merit and of course the top five is where I have always wanted to be, so hopefully I can push on and get on to the Challenge Tour but I will have to keep playing well because the standard is so good on the EuroPro.”

The final round was filmed for a two-hour highlights programme to be aired on Sky Sports HD on Tuesday, July 1 with repeats the following day. The HotelPlanner.com PGA EuroPro Tour heads to Scotland next, for the Motocaddy Masters at The Carrick on Loch Lomond (July 9-11) and then to Royal Burgess in Edinburgh for The Simpson and Marwick Championship (July 16-18).