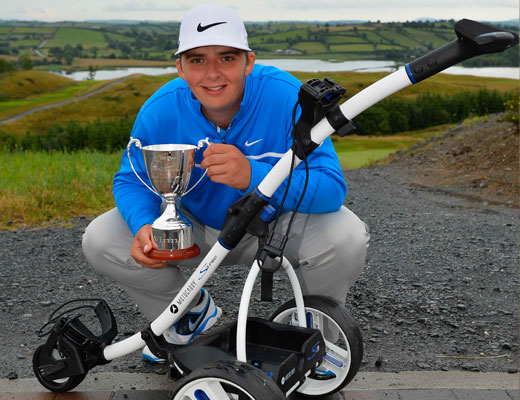 Armitage finished the event eight under par after his four-under last 18 at the par-72 Concra Wood Golf Club in Castleblayney, Ireland.

The Yorkshireman began the final round one behind Scotland’s Doherty but began in some style with an eagle on the par-five first, climbing to six under alongside his playing partner Doherty, who opened with a birdie four.

Birdies on the third and fourth afforded Armitage a two-stroke advantage, but Doherty hit back-to-back par breakers at seven and eight to leave the pair tied at eight under.

Armitage dropped back one when he bogeyed the tenth but Doherty joined him three holes later when he took six at the par-five 13th.

On the 14th Armitage returned to eight under and as heavy rain began to engulf the course at Concra Wood, Doherty dropped to six under with a bogey on the 17th. His English rival held his nerve to par the last and collect the £10,000 winner’s cheque and a brand new Motocaddy trolley.

“I have only played twice on this tour before and I missed the cut both times,” said Armitage on collecting his trophy. “This is my first event of the year since Qualifying School and it is great to win, I didn’t think it would feel as good as it does to win it. Concra Wood is a great test.

“The rain got heavy on the last three holes and I just had to focus and play the shots I needed too.”

Doherty takes home £5,000 after finishing six under par for the tournament, while his compatriot Elliot Saltman shot a six-under-par final round 66 to fire himself from one over par at the start of the day to five under and third place by the end.

Richard Edginton shot a four-under final round to finish fourth. The Wimbledon golfer had to putt the last 11 holes with his driver after a mishap left his putter bent.

A two-hour highlights package of the Kingspan Concra Wood Open will be broadcast on Sky Sports HD at 7pm on Tuesday, August 6, repeated on Wednesday, August 7. The next PGA EuroPro Tour event takes place at Rowallan Castle, Ayrshire and begins on Wednesday, July 31.