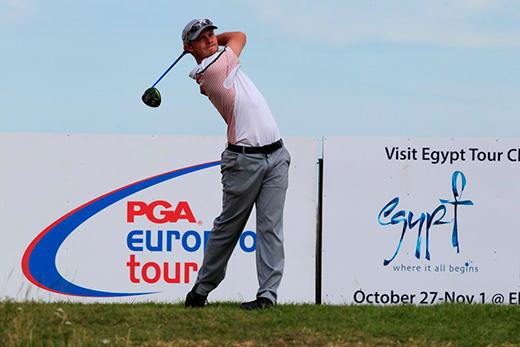 The Worthing golfer is playing his first year on Europe’s third-tier tour and his £10,000 win moves him inside the top 15 on the Race To El Gouna, from which the top five at the end of the season graduate to the Challenge Tour.

Miles Collins (Stoke By Nayland Golf Club) came second on six under after a final round 69 (-3). Michael McGeady, Scott Fallon, Stuart Archibald and Kevin Harper shared third on five under.

Tarver-Jones began the opening round one back from Darren Wright (Rowlands Castle), but his final-round playing partner carded a four-over 76 and finished the tournament tied 16th on two-under-par.

“It is a tough front nine but I played really solid golf at the start of the round,” said Tarver-Jones, who wins a brand new Motocaddy trolley and Shotsaver range finder, as well as his £10,000.

“The putter was on fire front nine and that is key. I played with Darren in the first two rounds so I felt at ease with him and in a way I wasn’t thinking about any other players, just me and him. It was only with about four holes to play I considered other players and what position I was in.

“This is my first season on the EuroPro and I have learnt a lot mentally. Suddenly you have a cut involved and I have learnt to enjoy being on the cut line and try and push towards being ahead and being in the lead, which is why yesterday I shot a five under going for the lead rather than just trying to make the cut.”

Highlights of the WPT Invitational will be broadcast on Sky Sports on Tuesday, September 2 with repeats the following day. The HotelPlanner.com PGA EuroPro Tour continues next week with the PDC & WSL Open at The Oxfordshire.