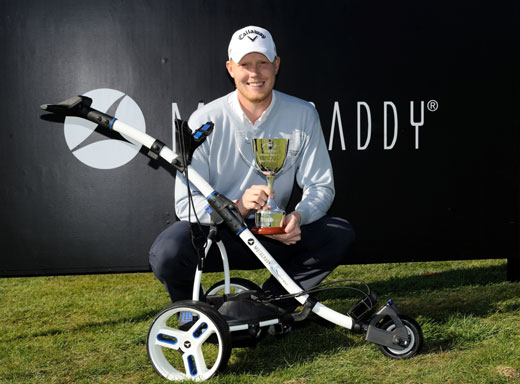 Dan Waite won the Motocaddy Masters by one stroke to Paul Grannell and Stiggy Hodgson after he finished one under par in the 888poker.com PGA EuroPro Tour season opener at Wensum Valley Hotel, Golf and Country Club in Norfolk on Thursday.

Waite, based at Wisley Golf Club in Surrey, holed a birdie putt on the 18th to record a one-under-par final-round 72 and beat overnight leader Hodgson (Wisley Golf Club) and Grannell (Vale Royal Abbey), who shot the week’s best score of 68. Waite won £10,000 and a brand new Motocaddy trolley and also secured an invite to the Scottish Hydro Challenge event on the Challenge Tour.

The 24-year-old opened his final round with a bogey but made birdies at three and four. He dropped down the leaderboard after a bogey at seven and a double on the eighth but birdies at 14, 15 and 18 saw him conclude the tournament one under par.

“It feels great to get my first professional win under my belt,” said Waite. “I want to take it from here and try and get a couple more.

“This morning I thought I had a shout. I saw Billy Fowles had finished strongly yesterday and had given himself a bit of a lead but I felt if I stayed patient and tried to get some birdies I would have a chance.

“I thought I would need a birdie on the 18th and I knew I just needed a good drive and that would give me a good chance of making the green in two. I hit a good second shot and then holed the birdie putt.”

Grannell had a nervous wait in the clubhouse after he signed for a five under two hours before the final groups completed their rounds. The 27-year-old began the day nine strokes off leader Fowles but a birdie at the third and four on the last six holes saw him complete the week level par.

Hodgson was second overnight but shot four bogeys on his final round. An eagle three at the 14th was his only par breaker on the final day.

Overnight leader Fowles struggled in his closing round and finished tied sixth, three over for the tournament, after recording a third-round 80, three-over-par.

Highlights of the Motocaddy Masters will air on Sky Sports HD on Wednesday, May 15.