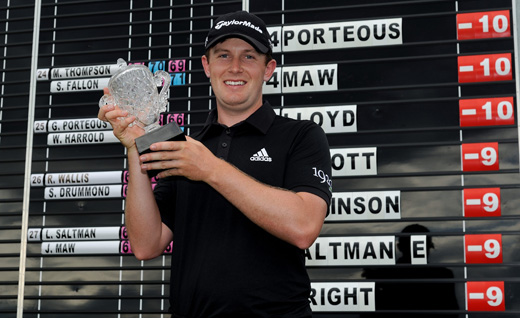 Amateur Champion Garrick Porteous claimed his first professional win as he took the FSC Invitational title after a play-off in the PGA EuroPro Tour event at The Astbury in Shropshire.

The play-off took place on The Astbury’s spectacular par-three 18th and on the first play both Maw (Rockliffe Hall) and Porteous (ISM) made par, but Lloyd (Toft Hotel) found a greenside bunker and made bogey. On the second play Maw too found the sand but played out to within feet of the pin. However, Porteous was well-placed on the green and putted in one for birdie and the victory.

“It is great to get the first pro win in,” said Porteous, who wins £10,000 a brand new Motocaddy and a Shotsaver range finder. “I got off to a slow start as a pro, missing a few cuts, but coming here and winning feels great and builds up the confidence.

“It is always nice to win and I am happy. I will see what happens for the rest of the season, I think I might get some European Tour invites and also play a few more EuroPro events.

The final round was filmed for a two-hour highlights programme to be aired on Sky Sports HD on Tuesday, June 24 with repeats the following day. The PGA EuroPro Tour continues next week with the HotelPlanner.com Championship at Cumberwell Park in Bradford-on-Avon.